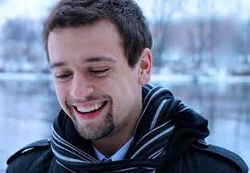 Zachary J. Moore (b. 1992, Wisconsin) is an American composer and arranger.

Zach began composing in 2009 as a student at Muskego High School, and recently graduated with the music education degree from the University of Wisconsin - Eau Claire. He has had the opportunity to have master classes and guidance from some of the worlds leading choral composers including Eric Barnum, Dan Forrest, Ola Gjeilo, Ethan Wickman, Timothy Takach,and Jake Runestad.

Since 2013 Zach has received numerous commissions and performances from choral groups and societies all over the world. Notable performances include premieres by the University of Wisconsin - Eau Claire Women's Concert Chorale, The Singing Statesmen, Concert Choir, and the UW - Eau Claire Wind Symphony. Zach's choral works have been performed at the Nebraska State Music Educator's Association Conference and at the Taipei National Concert Hall by the Taipei Youth Choir. His first work for Wind Band, In Memorium, was premiered at the 2016 CBDNA North Central Regional Conference in Ames, IAowa.

Throughout Zach's career as a composer he has received numerous awards, such as third place in the Wisconsin Student Music Association's Student Composition Project and third in the renowned American Prize.