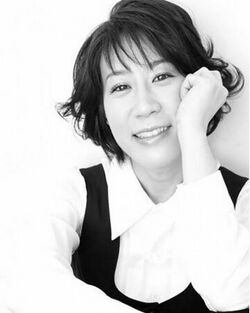 Yoko Kanno (b. 18 March 1963, Sendai, Japan) is a Japanese composer, arranger and keyboardist.

Kanno's earliest experiences with music came from attending church with her parents. She studied keyboard from a young age on both the piano in her home and the organ at her kindergarten. In elementary school, she began participating in composition contests, but in high school, Kanno began to take more of an interest in literature than in music.

Kanno attended Waseda University, where she majored in literature, but she transcribed music for various student groups at Waseda in her free time. While at Waseda, Koei, a Japanese video game company, asked Kanno to compose the soundtrack to Nobunaga's Ambition. The game turned out to be a hit, and Kanno's music career was launched.

Yoko Kanno is best known for her work on the soundtracks of anime films, television series, live-action films, video games, and advertisements. She has written scores for Cowboy Bebop and its live-action adaptation, Darker than Black, Macross Plus, Turn A Gundam, The Vision of Escaflowne, Ghost in the Shell: Stand Alone Complex, Wolf's Rain, Kids on the Slope, Genesis of Aquarion and Terror in Resonance, and has worked with the directors Hirokazu Kore-eda, Yoshiyuki Tomino, Shinichirō Watanabe and Shōji Kawamori. Kanno has also composed music for pop artists Maaya Sakamoto and Kyōko Koizumi.

Kanno is also the front woman for the Seatbelts, who perform many of Kanno's compositions and soundtracks.