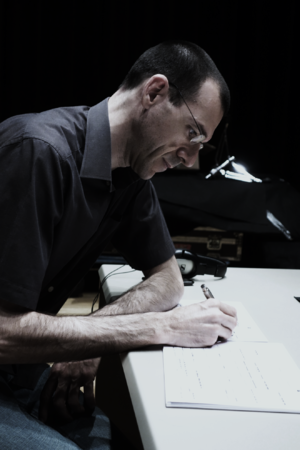 Xavier Pagès-Corella (b. 1971) is a Spanish composer and conductor.

Pagès-Corella studied in the Conservatory of Barcelona and the Conservatory of Liceu where he graduated in piano with Margarita Serrat and Montserrat Almirall, composition with Salvador Pueyo and conducting with Albert Argudo. In 2000 he was admitted in the Conservatory of Vienna, where he studied conducting with Georg Mark and Reinhard Schwarz. He also has attended several conducting and composition marsterclasses in which he has worked with conductors such as Ovidiu Balan, Robert Gutter, Manuel Hernández Silva, Collin Metters, Antoni Ros Marbà and composers such as Carles Guinovart and Albert Sardà. In 2008 he met Joan Guinjoan who became one of his main mentors.

In 1994 he won the Competition Josep Mirabent i Magrans for young musicians, with which he studied conducting and composition with Lou Harrison, Laszlo Heltay and Diego Masson, at the Dartington International Summer School. In 2005 he received a special mention of the selection jury of the Besançon International Competition for Young Conductors, and won the assistant conductor position of Salvador Mas and Manel Valdivieso in the National Youth Orchestra of Catalonia. In 2016 he was finalist of the IV International Conducting Competition of the Cordoba Symphony Orchestra. Along with his music studies he graduated as Electric Engineer. His project on a computer-assisted piano tuning method was awarded by the prize of the Industrial Engineers Association of Catalonia.

He has conducted in festivals and auditoriums such as L'Auditori of Barcelona, the Palau de la Música, the Auditorio Manuel de Falla, the Barcelona Grec Festival, the Castell de Peralada Festival, the Pocket Opera Festival of Barcelona and the Pau Casals International Music Festival. He has conducted ensembles such as the Granada Symphony Orchestra, the Eivissa Symphony Orchestra, the Elche Symphony Orchestra, the Giorquestra, the Orquestra Camerata Musicae, the Orquestra Camerata XXI, the Eduard Toldrà Camerata, and the Terrassa 48 Chamber Orchestra. Internationally, he has debuted in America with the Mendoza Philharmonic Orchestra (Argentina) and conducted ensembles such as the Arts Symphony Orchestra of Culiacán (Mexico), the Orchestra of Catalogne (France), the Philharmonic Orchestra 'Mihail Jora' of Bacau (Rumania), and the Thüringen Philharmonic (Germany). He also has conducted contemporary music ensembles such as Barcelona 216, Grup 21, Sitges 94 and the Barcelona Modern Ensemble of which is musical director from 2017. With these ensembles he has performed at festivals such as Sampler Series of L'Auditori of Barcelona, The Mostra Sonora of Sueca, the ME_MMIX of Mallorca, the Turbulences Sonores of Montpellier and the Cycle of the Contemporary Music Foundation.

Between 2004 and 2009, he has been conductor of the Sant Jordi Cobla with which he had an has conducted several recordings for Catalunya Música, the National Radio of Spain, Harmonia Mundi and Columna Música. Pedagogically, he has collaborated in the concerts of the Academy of the Catalonia School of Music (ESMUC), the Orquestra Fusió Sant Cugat, the Pau Casals Music School Orchestra and the Figueres Youth Orchestra. From 2015 he teaches conducting and composing at the Conservatory of Liceu in Barcelona.

He has been awarded in several national and international composition awards, such as the Andrés Gaos Composition Prize (A Coruña, 2014), in the International Composition Competition 'City of Tarragona', the Oare String Orchestra Composing Competition (United Kingdom, 2004) and the Francesc Basil Memorial (2000). He also has received commissions such as the Granada Symphony Orchestra (2018), the World Symposium on Choral Music (2017), L'Auditori of Barcelona ('Cantània', 2015), the Cervera Music Festival (2014), the Sardanist Federation of Catalonia (2014 ,2012), the Orfeó Català Foundation — Palau de la Música (2006, 2008, 2011), the Sant Cugat Symphony Orchestra (2005), the Pocket Opera Festival of Barcelona (2004) and the Memorial Joaquim Serra (2001).