With Malice Toward None (A Hymn for Band) 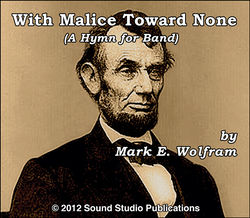 With Malice Toward None (A Hymn for Band)

"With Malice Toward None" (A Hymn for Band) was inspired by the last paragraph of President Abraham Lincoln's 2nd Inaugural Address on March 4th, 1865 in which he said:

"With malice toward none, with charity for all, with firmness in the right as God gives us to see the right, let us strive on to finish the work we are in, to bind up the nation's wounds, to care for him who shall have borne the battle and for his widow and his orphan, to do all which may achieve and cherish a just and lasting peace among ourselves and with all nations."

These powerful words are as apropos today as they were in 1865. This passage has great resonance in that it encapsulates basic moral responsibilities which so many of us have been taught: forgiveness, generosity of spirit, and trust in a higher power. Sadly, President Lincoln would be felled by an assassin's bullet little more than a month after delivering these moving and powerful words.

Mr. Wolfram used the cadence and spirit of Mr. Lincoln's text to compose a hymn-like melody. From that hymn he wrote an extended work which mirrored the turbulent days in which this Inaugural Address was given - sometimes dark and brooding, sometimes warm and hopeful - and always with an undercurrent of change and uncertainty. It draws from a more tonal than dissonant palette, and yet it has plenty of satisfying departures from the expected. The work was written for and dedicated to Professor Marcellus Brown and the Boise State University Symphonic Winds, who premiered it on Aprill 22, 2012.