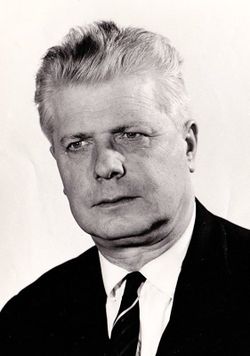 At the age of sixteen, Willy Ostijn entered the Institut Lemmens of Malines to study the piano with Marinus de Jong and the organ with Flor Peeters. He got a pedagogical diploma at the Royal Conservatory of Ghent, and first prizes of counterpoint, piano, chamber music and composition. Willy Ostijn becomes the second organist of the St Rumoldus’ Cathedral of Malines. From 1938 until his retirement, he was also a professor of musical education at the Royal Atheneum of Rœselare, a function that did not prevent him from giving lectures at the Music Academy of Izegem from 1939 to 1949.

Before the Second World War, Ostijn had a reputation with the Trio Willy Ostijn which played the great works of the repertory and Ostijn’s own compositions. Between 1950 and 1960 his symphonic music and concertante pieces, written in a romantic style, were performed by many orchestras in Belgium and broadcast abroad. Conductors Paul Doulliez, Leonce Graz, Ernest Maes, Fernand Terby and Jozef Verhelst were the most active ones to publicize his works.

From 1960, the disinterest of the audience towards "light music" and the neoclassical style caused the decline of Ostijn’s career. The reorganization of public broadcasting in Belgium in 1961 meant that his works were no longer broadcast. Thereafter, Ostijn devoted himself mainly to chamber music and choral music.

Far from seeking originality at all costs, Willy Ostijn gives his audience a chance to have a good time with a man of taste. Ostijn said: “Both in terms of technique and of vision, I have always remained faithful to the romantic tradition that sees music as a spontaneous and logical development of lyrical themes through classical harmony and rich, varying orchestration”. Between 1945 and 1955 he specialized in brilliant works (rhapsody, overture, concert piece, symphonic poem), often descriptive: Spaanse balletsuite (Spanish ballet suite), Beelden uit Broadway (Images from Broadway), Marokkaanse Suite (Moroccan Suite), Ijslandvaarders (Icelandic seafarers), Beelden uit het Oosten (Images from the Orient), or both concertstück for piano and orchestra and concertstück for piano and strings. His symphonic work is close to the Belgian Arthur Meulemans, the French Maurice Thiriet, the English Haydn Wood and the American Ferde Grofé.