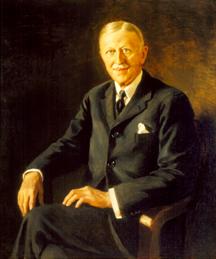 He received his education at the Columbia University School of Mines. Among his administrative positions in industry, he was chairman of the board of the American Locomotive Company in 1916 and general superintendent of the Jackson and Woodin Manufacturing Company from 1892-1895.

He was also a composer of note, composing songs, orchestral works, and several short pieces for band. His Franklin Delano Roosevelt March was played by the U.S. Navy Band at the President's inauguration ceremony in 1933.