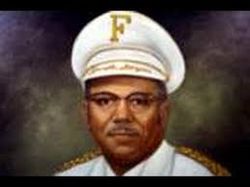 At age 12, Foster began his music career by learning to play the clarinet. While in high school, his talent was recognized and he was appointed student director of the Sumner High School Orchestra, in Kansas City, Kansas. In 1936, he became the director of an all-city band.

Dr. Foster was best known as the director of Florida A&M University Marching "100". He served as the band's director from 1946 to his retirement in 1998, where his innovations revolutionized college marching band technique and the perceptions of the collegiate band.

Foster was inducted into the Florida Artists Hall of Fame, the National Association for Distinguished Band Conductors Hall of Fame, the Florida Music Educators Association Hall of Fame and the Afro-American Hall of Fame among others. He also served as the president of the American Bandmasters Association and was appointed to the National Council on the Arts by President Bill Clinton. Foster was the first recipient of the United States Achievement Academy Hall of Fame Award and the Outstanding Educator Award presented by the School of Education Society of the University of Kansas Alumni Association. In 1992, Sports Illustrated declared The 100 as the best marching band in the country. In 1998, Foster was inducted as a Great Floridian by the Museum of Florida History. He was also a director of the prestigious McDonald's All-American High School Band (1980–1992).

He was a board member with G. Leblanc Corporation, John Philip Sousa Foundation, International Music Festival, Inc., and the Marching Musician. On December 17, 1998, the Board of Electors in Chicago, Illinois, elected Foster to the National Band Association Hall of Fame of Distinguished Band Conductors, the most prestigious honor a bandmaster can receive.

Foster authored 18 articles for professional journals, four published marching band shows, and the textbook, Band Pageantry, considered the Bible for the marching band. Foster also wrote the book The Man Behind the Baton. He is the composer of Marche Brillante, National Honors March, March Continental, and Centennial Celebration.