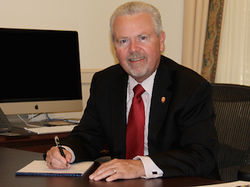 William L. Ballenger (b. 2 May 1951, Independence, Iowa) is an American conductor, composer and educator.

He took his undergraduate studies at the University of Iowa (Bachelor of Music in Music Education, 1973) and pursued graduate studies at Northeast Missouri State University (M.A. in Music Education and Composition, 1980). He began his career as assistant band director in the public schools of Oskaloosa, Iowa (1974-1981). In 1981, he became director of bands at Ankeny (Iowa) High School.

Ballenger was named associate director of bands and assistant professor of music theory at the University of Nebraska-Lincoln in 1983. He directed the Cornhusker Marching Band, the concert band, and a brass ensemble there. In 1987, he moved to Oklahoma State University, where he was director, music arranger, and drill designer for the Cowboy Marching Band and an instructor in music education. In 1992, he was named head of the Department of Music at Oklahoma State University, and in 2004 took the position of Director of the School of Music at Texas Tech University in Lubbock.

Professor Ballenger has composed more than seventy original compositions and arranged more than six hundred works for various ensembles. He has been active as a clinician, adjudicator, and guest conductor throughout the Midwestern states. He is a member of the College Band Directors National Association, the Oklahoma Music Educators Association, and the Oklahoma College and University Administrators. He holds honorary memberships in Phi Beta Mu, Phi Mu Alpha, Kappa Kappa Psi, and Tau Beta Sigma.

Ballenger was co-founder of the Stillwater Community Band in 1992 and was its first conductor.