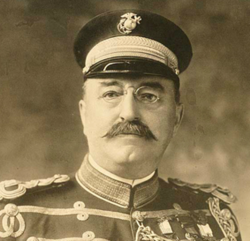 Santelmann began the study of violin while very young and showed remarkable talent. He began the study of harmony at age 14. He quickly became acquainted with the principle instruments used in both the band and orchestra, and this greatly assisted him in his studies of harmony and composition. He entered military service at age 18, enlisting as a volunteer in the band of the 134th Regiment in Leipzig. During the three years he served in this band, he took advantage of the city's rich musical life. When his service was completed, he received his father's consent to further his music studies. After three additional years of study, he accepted a position with the Philadelphia Orchestra. At the conclusion of this engagement, he became first violinist and baritone player with the U.S. Marine Band in Washington, D.C.

He served with the Marine Band for eight years before resigning to organize his own orchestra. While directing his own group, he also conducted the Columbia Theater Orchestra, both in Washington, D.C. On March 3, 1898, he was called back to the Marine Band as its conductor. At the time, the band was made up of only 30 classified musicians and eight privates. At his suggestion, the Marine Corps Commandant recommended to Congress that a bill be passed to double the size of the band. President William McKinley signed the bill on March 3, 1899, and as a result, Santelmann added an orchestra to the band. From that time on, every applicant to the Marine Band was required to pass on audition on a stringed instrument as well as a band instrument, unless he was a soloist or his band instrument was also utilized in the orchestra. This new approach quickly gained favor with both the public and the military establishment.

During Santelmann's tenure of 29 years as director of the Marine Band (the longest of any leader), the band participated in many prominent national and international affairs. It was always well received on its concert tours, during which it visited every state in the Union and drew praise from critics and public alike. Santelmann received an honorary doctorate in music from George Washington University in 1908 and held diplomas from several major exhibitions for his services. He retired from his position as Marine Band conductor in 1927.