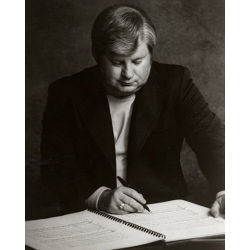 Hill's first teacher was his mother, Audrey Hayes Hill, and he began his studies at the age of four. He later studied saxophone with Floyd and Irene Weger and performed as a member of the local high school and several municipal bands.

In 1955, Hill became a woodwind instructor and assistant director of bands at East Texas State University. He was appointed director of bands there in 1958. In 1963, he left East Texas State to work toward a Ph.D. degree at the University of California at Los Angeles. During his six years at UCLA, he also taught there, spending summers teaching at Adams State College in Colorado. From 1966-1969, he taught saxophone and arranging techniques and administered and conducted several bands at Arizona State University.

From 1972-1982, he taught at California State University, building the band program from one group of 27 players to a complete band program, including a 56-piece wind ensemble. He was also chairman of the instrumental music department.

He performed, conducted, and directed clinics in 38 states and also in England, France, Switzerland, Italy, and Japan. He was the subject of a Ph.D. dissertation by Robert Morsch of the University of Iowa, entitled William H. Hill, a Man and His Music.

In 1980, Dr. Hill was recipient of the Outstanding Alumni Award from the University of Northern Colorado. Other awards include ASCAP Serious Music Awards (1982-1985) and the Phi Mu Alpha Alpheus Award (1977). He won the Ostwald Composition Award in 1977 and was first runner-up in 1976.