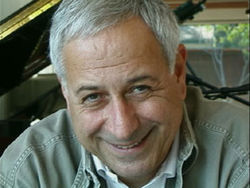 William Goldstein (b. 1942) is an American composer.

At the age of nine his prodigious talents brought him to Columbia University. He was arranger for the U.S. Army Band 1967-1969.

In 1975 he was discovered by Berry Gordy, who brought Mr. Goldstein to Los Angeles under contract to MOTOWN , as a recording artist / composer and producer. At the same time, interestingly enough, Mr. Goldstein was finishing a commission for a Bicentennial work, Celebration Overture 1776-1976, which was performed by the National Symphony Orchestra in May of 1976.

Since then he has scored over 50 film and TV projects (including Fame, The Miracle Worker, Twilight Zone and Shocker), written Op-Ed's for the New York Times and the Los Angeles Times. He is a founder of the Museum of Contemporary Art in Los Angeles, a director of the California State Summer School for the Arts, and serves on both the music branch executive committee, and foreign language committee of the Academy of Motion Picture Arts and Sciences. He has also been a "visiting artist" for the Academy, lecturing from the Far East to the Middle East on contemporary aesthetics as well as music in film. He was asked to deliver the Academy Foundation's First Seminar on Film Scoring.

Mr. Goldstein early on established himself as a composer who is comfortable all over the musical map. In addition to film scoring, recording and concert score performed from Carnegie Hall to Symphony Hall Boston, he established himself as an innovator of new technology. In 1985 he created the very first completely computer-sequenced direct-to-digital score for NBC's oceanQuest. He then created the score for Sierra-on-line's King's Quest Four, the first interactive computer game with a full blown musical score, resulting in a revolution for the computer game industry. While the diversity of his activities have some thinking of Goldstein as a contemporary Renaissance man, his most formidable gift has always been his ability to sit at a piano and create "instant composition." He has gained a reputation as a unique keyboard improviser, spontaneously creating ballets with dancers of international renown, improvising complete scores to films that he is seeing for the first time; all in real time and in concert.