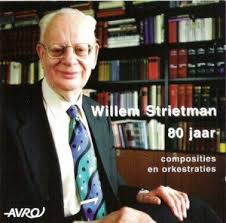 He studied piano at the Amsterdam school of music with André Jurres, music history and music theory at the Conservatory of Music in Amsterdam with K. Bernet Kempers and Ernest W. Mulder. As a composer he was autodidact.

From 1945 till 1952 he taught music theory at the Music School in Amsterdam. From 1952 to 1983 he was a member of the music department at the broadcasting company AVRO.

His works were performed in The Netherlands and abroad, e.g., in Brussels, Lugano and München. His most important compositions are the song cycles L'amour fardé (1951) and Canti di Castelvecchio (1951), the orchestral works 'An Indoor Overture (1971) and Mercator sapiens (1977).

Strietman was awarded the Visser Neerlandiaprijs for Sombra del ensueño for soprano, baritone and orchestra (1956) and the Johan Wagenaarprijs for Divertissement d'anches for oboe, clarinet and bassoon (1970).