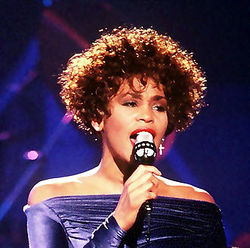 Her mother Cissy Houston, cousin Dionne Warwick and godmother Aretha Franklin were all legendary figures in American gospel and soul music. Cissy Houston was the choir minister at New Hope Baptist Church, and it was there that a young Whitney got her start. By the time she turned 15, Whitney was performing often with her mother and trying to get a record deal of her own. Around the same time, she was discovered by a photographer who was awed by her natural beauty. She soon became an extremely sought-after teenage model, one of the first African-American women to appear on the cover of Seventeen magazine. But music remained her true love.

When she was 19, Whitney Houston was discovered in a nightclub by the renowned Clive Davis of Arista Records, who signed her immediately and took the helm of her career as she navigated from gospel to pop stardom. In 1983, Houston made her debut on national television, appearing on The Merv Griffin Show to sing Home from the musical The Wiz. In 1985, she released her debut album Whitney Houston and almost immediately became a smash pop sensation. Over the next year, her hit singles Saving All My Love for You and How Will I Know helped the album reach the top of the charts, where it stayed for fourteen non-consecutive weeks. Houston won a Grammy in 1986 for Saving All My Love for You. Houston followed the monumental success of her first album with a second release, Whitney, in 1987. That record, too, went platinum many times over and won more Grammy Awards, leading to a successful world tour. During this time, the singer also appeared at a concert for Nelson Mandela's birthday and founded the Whitney Houston Foundation for Children, a nonprofit organization that funds projects to help needy children over the world.

She crossed over successfully into acting in 1992 by starring opposite Kevin Costner in the wildly popular The Bodyguard. With this movie, she set a trend for her films to follow: in each film she also released a hit single, creating sensational record sales for the soundtracks. Her smash single from The Bodyguard, a cover of Dolly Parton's 1974 I Will Always Love You, proved to be Houston's biggest hit ever, spending a record-breaking fourteen weeks atop the U.S. charts. The soundtrack album went on to win Houston three Grammys, including Album of the Year and Record of the Year.

In the late 1990s and early 2000s, Houston's increasingly rocky marriage, struggles with drugs and health problems threatened to derail her career. Although she released a new album, I Look To You, in 2009, Houston did not live long enough to see the latest comeback reach fruition, when she died of accidental drowning in 2012.