Whistler and His Dog, The (arr Barnes) 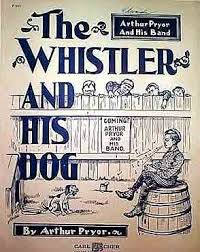 The Whistler and His Dog

Although best known as a trombone virtuoso, Arthur Pryor was also a successful composer. His 1905 caprice was extremely popular when it was first released, and now this new edition for today's concert band will allow a whole new generation to enjoy it. The whistling tune will be immediately recognizable.

This march caprice was composed for Pryor's own band in 1905. It became his most popular work, demanded everywhere by audiences who whistled along with the band and kept time with their feet. The tune was inspired by Pryor's memory of his boyhood pet bulldog, Roxy, who "was not very responsive to the spoken command, but he never failed to answer to a whistle, even forsaking the joys of a dog fight at my summons."