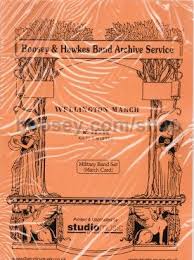 Wellington refers to the Duke of Wellington, Arthur Wellesley, whose forces administered a final defeat to Napoleon’s troops at Waterloo.

Dr. Timothy B. Rhea is director of bands and performing ensembles at Texas A&M University. His output of compositions and arrangements numbers over 300.