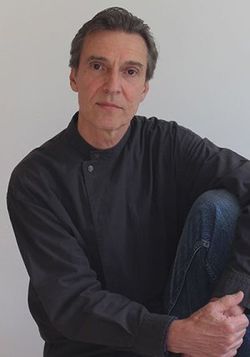 Subtitle: Sextet for Percussion with Piano

1. Edge of a Tide (Filo de Marea). In this movement I wanted to work with rhythmic ‘grooves’ which would create waves of sound that may be listened to as colour and texture. I wanted to give the audience the possibility of listening to this movement in a relaxed ‘easy’ way. Accordingly I imagined that it would be possible to follow this music as if one were listening to advancing and retreating waves of sound that bounce and rebound as they approach or retreat from us like a tide. But I also wanted to give the listener the option to explore the detailed musical lines that create the colour and texture at the surface of this music, and allow him/her to delve more deeply into the multilayered construction that underpins the musical discourse. The challenge for me was to make both listening modes possible and preferably equally interesting.

2. Through the Wild Rain (A través de la lluvia salvaje). This movement consist of a simple theme which undergoes stylistic transformations while remaining for the most part melodically unchanged. From a very soft beginning, the movements progresses into a slow groove that eventually turns into a dance with perhaps the swagger of a tango or some other Latin American dance.

3. Todos los ríos El río (All the Rivers The river). The title of this movement paraphrases the title of a short story by the Argentinean writer Julio Cortazar (‘All the fires The fire’) where various characters in two different historical periods appear to relate to each other through time and space as their two stories follow similar trajectories. In this music, the various melodic lines, cells and phrases that are first presented to the listener, the various ‘rivers’, appear to follow their own course, their own independent trajectory. At times, they even seem to be running away from each other as if heading in opposite directions. As the music progresses, the perception changes giving the impression that all these musical strands are homing into the same pivotal point, shearing perhaps one single path. The music explores this duality where all these rivers appear to be, or perhaps indeed are, just the one river.

Water was commissioned by a consortium of institutions and individuals organized by Michael Burritt and administered by William Moersch at New Music Marimba Inc.