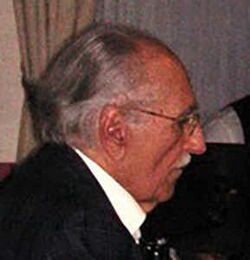 Walter Kalischnig (b. 28 April 1926, Celje, Slovenia) is a Slovenian composer, arranger and conductor.

In 1945, Kalischnig started as a dance and entertainment musician in Graz, and then moved to Switzerland in 1949 and to Holland in 1953. He also worked in Amsterdam and Scheveningen since 1958, in The Hague and in Hilversum since 1960; he has been a Dutch citizen since 1970. He was one of the leading musicians in his field.

From 1970 to 1984 Walter Kalischnig worked as a sound engineer at Radio Hilversum.

He wrote more than 200 arrangements for the big bands of Franz Thon and Erwin Lehn. In 1982, he founded the Novelty Sound Orchestra. Later in life, he turned to brass music as a conductor, arranger and composer.

Kalischnig is also known to have written under the pseudonyms "Vic Lingo" and "Frank Bolina."