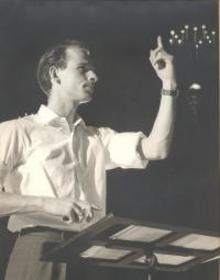 Walter began his teaching career at Wilcox Lake, detoured to the University of Toronto to earn his mus. bac., then continued as a music teacher for the Toronto Board of Education from which he retired in 1991.

While at U of T, Walter led the Hart House Glee Club and the University of Toronto Chorus. While teaching, Walter was the organist and choirmaster at St. Bart's Anglican Church, Toronto, for many years, training them at church, taking them on tours, including Expo 67. After retirement, he moved to his home on Mountain Lake, became the organist at St. Paul's, Minden, and founded the Brass Quintet of Minden.

Through the years he has arranged music for choirs, written books on playing of band instruments, in concert with the Canadian Brass, and taught thousands of students the wonders of music.