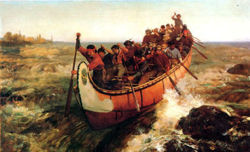 The voyageurs were French-Canadian men who guided and paddled the canoes of explorers and fur traders from Quebec and Montreal to the regions bordering the Great Lakes and on to the Mackenzie and Columbia Rivers during the 17th, 18th and early 19th centuries. While they paddled hour after hour in their cramped canoes, the voyageurs sang of their canoes, their country, their life and their loves. This suite is based on melodies of their songs.

At least two of the composer's ancestors, both named Antoine Pepin, were voyageurs. This suite was dedicated to the composer's nephew, Alexander Pepin Gilbert, on the occasion of his Bar Mitzvah.

Voyageur Suite was commissioned by Dr. Gary Powell Nash of Fisk University. The Alaska Brass of the United States Air Force Band of the Pacific presented the world premiere at a concert sponsored by the Canadian Consulate at the Loussac Library's Wilda Maston Theater in Anchorage, Alaska, on February 15, 2007.