Voice, A Messenger, A 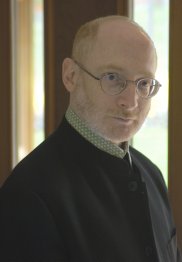 The actual typography of this work is "a Voice, a Messenger."

The composer states the following about a Voice, a Messenger:

When Philip Smith asked me to write a concerto, he suggested as sources the appearance of trumpets and its relatives in Scripture – shofar (ram’s horn), cornet, horns, etc. I developed impressions for the work while attending Rosh Hashanah services, hearing the shofar in person, and rereading passages from the Torah that place these instruments in a spiritual context.

…there was thunder and lightning and a dense cloud over the mountain; there was a loud Shofar blast, and all the people in the camp trembled. – Exodus

Morning Prayer, terse and, like most of the concerto, pensive, chromatic and conflicted, calms only at its end, when a chorale-like series of essential three-note chords intervene.

The timbrel is the Biblical forbear of the tambourine, and the title Timbrel Psalm is a play on words. Timbre (or timbral) is commonly used by musicians to refer to the “color” of instrumental sound. This dance-like movement is made of short phrases in a variety of timbres, much of it lightly scored and vigorous.

The expansive Evening Prayer features flugelhorn solo. It alternates lyrical, pensive lines with ongoing development and dramatic clashes between soloist and ensemble, ending as unsettled as it began.

The music of the final movement, Monument - Tekiah, Teruah does not directly imitate the sound of a shofar but suggests the urgency of its call, and much of it is built on fanfare-like passages. The most dramatic of the four movements, it is made of stark contrasts, bitter harmonies and dense textures. The chorale from the opening returns at the very end, just after the work’s most lyrical moments, and culminates in the flanking of the soloist with two other trumpets. This suggests references in antiquity to the shofar being paired on either side by two silver trumpets in New Year’s Day services in the second Temple in Jerusalem, before its destruction.

Thou hast heard the sound of the Shofar, and the alarm of war; destruction follows upon destruction. - Jeremiah

a Voice, a Messenger was composed in 2010 and edited in December 2012. Its dedication reads: "Written for Philip Smith, in celebration of his three decades with the New York Philharmonic; and in recognition of the generous and ongoing commitment to the creation of music of our time by that great orchestra and the distinguished Big Ten Band Association."

a Voice, a Messenger was co-commissioned by the Big Ten Band Directors Association, and by the New York Philharmonic, made possible with a generous gift from Marie-Josée Kravis, and with major support provided by the Francis Goelet Fund. This is the fourth performance of a Voice, a Messenger.