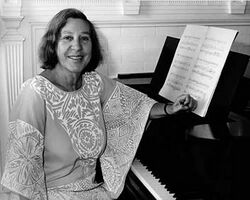 Over her 70-year career, Vivian Fine became one of America’s most important composers. She wrote virtually without a break for 68 years, producing over 140 works. Although perhaps best known for her chamber music, she wrote in every genre, including large-scale symphonic and choral works.

A piano prodigy, she became at age five the youngest student ever to be awarded a scholarship at the Chicago Musical College. At age eleven she became a student of Scriabin disciple Djane Lavoie-Herz. Fine composed her first piece at thirteen while studying harmony with Ruth Crawford Seeger, who considered Fine her protege. Through Madame Herz and Crawford, Fine met Henry Cowell, Imre Weisshaus, and Dane Rudhyar, who became strong supporters of her talent.

Fine made her professional debut as a composer at age sixteen with performances in Chicago, New York (Solo for Oboe, at a Pan-American Association of Composers’ concert) and Dessau (Four Pieces for Two Flutes, at an International Society of Contemporary composers’ concert). In 1931, the 18-year-old Fine moved to New York to further her studies. She was a member of Aaron Copland’s Young Composers Group, and a participant at the first Yaddo Festival in 1932. In 1937 she helped found the American Composers Alliance and served as its vice-president from 1961 to 1965. In addition to her career as a composer, Fine continued to perform. In the 1930s she was perhaps the best-known performer of contemporary piano music in New York. She premiered works of Ives, Copland, Brant, Cowell, Rudhyar, and others, and studied piano with Abby Whiteside from 1937 to 1946.

From 1964 to 1987, Fine taught composition at Bennington College in Vermont. Her years there, surrounded by a faculty of composers and musicians eager to perform her work, were some of the happiest and most productive of her life. She also taught at New York University (1945-48), Juilliard (1948), and SUNY Potsdam (1951). In the 1960s and 70s she gave a series of lecture-recitals on 20th century music at Notre Dame, Harvard, Skidmore, Bard, and William and Mary.

Among Fine’s many awards were a Guggenheim Fellowship, grants from the Ford, Rockefeller, Ditson, Woolley, Koussevitsky, Readers’ Digest and Elizabeth Sprague Coolidge foundations, several grants from the National Endowment for the Arts, and the Dollard and Yaddo Awards. In 1980 she was elected to the American Academy and Institute of Arts and Letters.