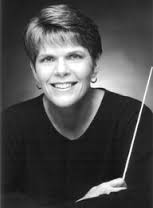 Virginia Allen (b. 1953, Phoenixville, Penn.) is a conductor, music educator, and arranger.

Dr. Allen studied French horn and conducting and earned a Bachelor of Music Education degree and a Master of Music degree in performance from the Catholic University of America in Washington, D.C. and a Diploma in Wind Conducting from the University of Calgary. She earned a Doctor of Education in the College Teaching of Music at Teachers College, Columbia University in New York City, where her dissertation topic was Developing Expertise in Professional American Orchestra Conductors. Virginia also completed an internship in Performance Activities at Juilliard.

She comes from a long tradition of service in military bands. Her grandfather, Joseph Flannery Allen, was a self-taught band director and music educator in Texas. Five of his sons served in military bands during World War II. Dr. Allen’s father, Col. Eugene W Allen, is the former leader and now conductor emeritus of the United States Army Band.

Dr. Allen previously served as the Associate Dean for Administration and the Assistant Dean for Orchestral Studies at The Juilliard School, where she was the founding artistic director of the Conducting Workshop for Music Educators. At Juilliard she taught The Art of Teaching in the Music Studio and conducting, co-founded and conducted The Juilliard Trombone Choir, and served as Executive Director of the Starling-DeLay Symposium on Violin Studies.

Additionally, Virginia taught conducting and music history at The Curtis Institute of Music in Philadelphia and conducting at Teachers College, Columbia University in New York City. She continues to teach conducting lessons online for Teachers College and is Artistic Director Emeritus of the Philadelphia Wind Symphony. She also served as Artistic Director of the Sun Valley Summer Music Workshops in Idaho, where she founded and conducted the Sun Valley Youth Orchestra.

Prior to teaching on the college level, Virginia enjoyed a 20-year career as a conductor and administrator in the U.S. Army Bands Program and achieved the rank of lieutenant colonel. As a pioneer for women in military bands, she was the first woman to command and conduct an active duty military band that included women when she was appointed Principal Conductor of The U.S. Army Forces Command Band in Atlanta. As the associate conductor of The U.S. Military Academy Band at West Point, she was the first woman conductor of that historic organization, as well as the Cadet Glee Club and Cadet Band. She also performed on stages from the Hollywood Bowl to Europe as the first woman conductor of the Army's premier touring ensembles from Washington, D.C., The U.S. Army Field Band and The Soldiers' Chorus. Her military career included an assignment as the Department of the Army Staff Bands Officer in Washington, D.C., where she managed over 100 Army bands and band activities worldwide.

Virginia frequently guest conducts, adjudicates and teaches master classes in the U.S. and internationally. She conducted Joseph Alessi, principal trombonist of the New York Philharmonic, and The Juilliard Trombone Choir on a compact disc recording.