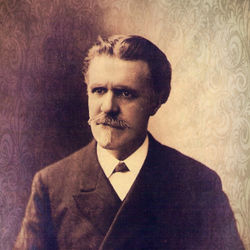 D'Indy was born into an aristocratic family of royalist and Catholic persuasion. He had piano lessons from an early age from his paternal grandmother, who passed him on to Antoine François Marmontel and Louis Diémer. From the age of 14 he studied harmony with Albert Lavignac. At age 19, during the Franco-Prussian War, he enlisted in the National Guard, but returned to musical life as soon as the hostilities were over.

The first of his works he heard performed was a Symphonie italienne, at an orchestral rehearsal under Jules Pasdeloup; the work was admired by Georges Bizet and Jules Massenet, with whom he had already become acquainted. On the advice of Henri Duparc, he became a devoted student of César Franck at the Conservatoire de Paris. As a follower of Franck, d'Indy came to admire what he considered the standards of German symphonism.

In the summer of 1873 he visited Germany, where he met Franz Liszt and Johannes Brahms. On 25 January 1874 his overture Les Piccolomini was performed at a Pasdeloup concert. In 1875 his symphony dedicated to János Hunyadi was performed. In 1876 he was present at the first production of Richard Wagner's Ring Cycle at Bayreuth. This made a great impression on him and he became a fervent Wagnerite. In 1878 d'Indy's symphonic ballad La Forêt enchantée was performed. In 1883 his choral work Le Chant de la cloche appeared. In 1884 his symphonic poem Saugefleurie was premiered. In 1887 appeared his Suite in D for trumpet, 2 flutes and string quartet. That same year he was involved in Lamoureux's production of Wagner's Lohengrin as choirmaster. His music drama Fervaal occupied him between 1889 and 1895.

Inspired by his own studies with Franck and dissatisfied with the standard of teaching at the Conservatoire de Paris, d'Indy founded the Schola Cantorum de Paris in 1894. He taught there and later at the Paris Conservatoire until his death. Among his many students were Isaac Albeniz, Leo Arnaud, and Cole Porter.

Among d'Indy's other works are other orchestral music, chamber music, including two of the most highly regarded string quartets of the latter nineteenth century (No. 2 in E major, Op. 45, and No. 3 in D-flat, Op. 96), piano music, songs and a number of operas, including Fervaal (1897) and L'Étranger (1902). Few of d'Indy's works are performed regularly today, however. His best known pieces are probably the Symphony on a French Mountain Air (Symphonie sur un chant montagnard français, also known as Symphonie cévenole) for piano and orchestra (1886), and Istar (1896), a symphonic poem in the form of a set of variations in which the theme appears only at the end.

His musical writings include the co-written three-volume Cours de composition musicale (1903–1905), as well as studies of Franck and Beethoven.