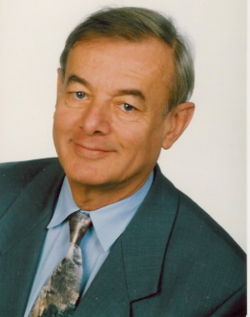 Veroslav Neumann (born 27 May 1931 at Citoliby near Louny, Czechoslovakia; died 21 November 2006) gained a formal education in composition at the Prague Academy of Arts under Jaroslav Ridky. Parallel to this, he learned his compositional skill from practical experience, as well as from collaborating with a wide range of amateur and professional ensembles. Later on, teaching assisted this contemplative composer, modern in his thoughts and sentiments, in finding his personal language on a highly professional level in chamber and symphonic music, as well as in the simpler forms for young and amateur music-makers. It is no coincidence that a considerable share of his work is represented by vocal compositions, among which, the most numerous, are songs, choruses, and songs or cycles for children in various age groups and levels of difficulty.

Neumann's vocal works, striking in their originality, are profoundly effective musically. High appreciation has been accorded to his chorus Soleils Couchants (Setting Suns) at the International Choral competition in Tours (1982). He was awarded prizes at the World Festivals of Democratic Youth and Students in Warsaw (1958) and in Helsinki (1962). In 1987, the Panton Publishing House Award was given to him for his Songs of Defiance and Strength while the Union of Czech Composers and Concert Artists Prize was given to him for Atlantis. Many of his songs for children have been included in various anthologies in the USSR and the German Democratic Republic where they have become a permanent feature in the repertoire of local choirs. An intimate knowledge of instruments as well as of the potentials and mentality of young instrumentalists have stimulated Neumann in writing instructive works for diverse instruments and chamber ensembles.

Veroslav Neumann began to systematically turn his attention to symphonic and chamber works during his mature creative stage. In these works, there is marked evidence of his desire to continue to be communicative in his musical expression, endeavoring to impart to the listener, in an intelligible way, the prevailing complicated language of music. A clearly positive response to his String Quartet, Symphonic Dances and other works, some of which met with appreciation in Czechoslovak competitions, have proved his approach to be successful.

A specific feature of Neumann's work is his intelligent wit which he has shown to good advantage equally in his thirty-minute Chimney Opera and in his shorter forms, even in mixed choruses, which are traditionally considered to serious in tone. The humor, combined with his singular demonstration of feelings and expression in both his lyrical and dramatic works, point to important characteristics in Veroslav Neumann?s compositions which are interesting from many points of view and most appealing.

From 1990-1998, Veroslav Neumann was the Director of the Conservatory of Music in Prague, Czech Republic.