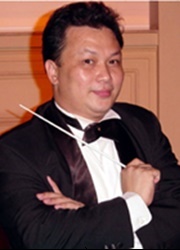 Vanich Potavanich (b. 27 June 1970) is a Thai composer, trumpeter and conductor.

While he was studying at the Faculty of Fine and Applied Arts, he performed as soloist with the C.U. Symphony Orchestra, participated in the ASEAN Youth Orchestra in Indonesia and took lessons of Samadhi and Joga for musician with Prof. ChoOChart Phitaksakorn. He was awarded a scholarship to study trumpet at the Rotterdam Conservatory, in the Netherlands. He performed solos regularly with major orchestra include BSO, NSO, The Orchestra of Ampleforth College (U.K.).

Mr. Potavanich has performed classical concert, ballet, opera, musical music with pop and jazz stars, and has been invited as a private teacher of trumpet and ensemble for the Thai Youth Orchestra and many major colleges and universities. He was principal trumpet of Bangkok Symphony Orchestra for 18 years (1986–2004) and also the National Symphony since 1992.

He was arranger and composer of many pieces for concert band, marching band and orchestra. Also he composes music for advertising movies on TV including the sound track for Thai and Indian movies. His works are performed by ensembles orchestras and concert bands in Thailand.

Vanich started his conducting and composition lessons with Prof. Narongrit Dhamabutra and more seriously in private conducting lessons with Maestro John Georgiadis and Hikotaro Yazaki. He would occasionally conduct the Bangkok Symphony Orchestra, National Symphony Orchestra,and BSO Ensemble, among others. He was selected to be BSO’s conductor in the “Concert in the Park” since 1995. He was music director of the Bangkok Symphonic Brass Ensemble.