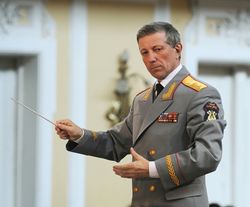 Khalilov's father was a military band conductor. When he was eleven years old, Khalilov was admitted to the Moscow Military Music School where he studied clarinet. Then he went to the military bandmaster department of the Moscow Conservatory. Upon graduation, Khalilov was named conductor of the Pushkin Higher Air Defense School of Radio Electronics. Six years later, he returned to the military bandmaster department of the Moscow Conservatory as a lecturer in conducting. In 1984, he was transferred to the military band service of the Armed Forces of the Russian Federation where, in 1992, he was named deputy chief. Beginning in October, 2002, Khalilov began a tenure as head of the Military Band Service and the chief military conductor in Russia, a post he held for 14 years. Since 2007, Khalilov has been the music director of the International Military Music Festival at Spasskaya Tower in Red Square, and has conducted concerts around the world.

Khalilov has overseen the music for many spectacular events in Moscow. In 2010, he conducted a massed band of more than 1,200 musicians at the Victory Parade in Red Square. At the conclusion of the event, he led a performance that included bands from the United States, Great Britain and France.

Khalilov is also an accomplished music composer apart from being a military conductor, and has written pieces for the brass band including Adagio and Elegy, marches such as Cadet, Youth, Rynda, Ulan, as well as romances and songs. He has composed many new military marches and songs, some of which he used in the annual Red Square Victory Day parades. In his career, he has earned many awards including: the Order of Honor; Order for Service to the Motherland in the Armed Forces of the USSR, 3rd Class; the Medal for Military Merit, 1st Class; and the title of People's Artist of Russia.

Valery Khalilov was killed in a plane crash on Christmas Day 2016.