Universe Is Full of Doors, The 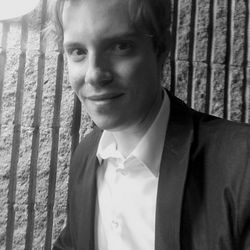 Subtitle: For Wind Symphony and Electronics

Part I - Beneath the Stars


Part II - Among the Stars

In 2013, Caroline Beatty asked me if I had any ideas for a wind ensemble piece. Immediately, I thought of the backstory to Frank Herbert’s Dune. This rich history, set thousands of years before the events in the novel, needs to be pieced together by the reader from bits of dialogue and a set of appendices. The story told by these fractured chronicles has become a recurring trope in science fiction. Humankind destroys the environment, builds an artificial intelligence to save itself, and said supercomputer wages war on its human creators. The beats of this story, echoed in countless books, films, and television shows, form the narrative arc of this piece.

Wind ensembles are dear to me. Most of my formative musical experiences were in the high school band room. Juxtaposing this ensemble, one that shapes breath itself into tone, with electronics seemed an ideal way to explore these ideas musically; to compare them to our current relationship with technology.

The first movement, Non nobis solum nati sumus (Not for us alone are we born), imagines the awakening of the first sentient computer. The piece begins with a bowed vibraphone playing a four-note motif: a jagged arpeggiation in D minor. Switches turn on, holding colors and chords that bubble out of the winds and percussion while the horns introduce the main theme. The ensemble reaches out to the extremes of its register while the electronics expand them: the fictional creator and computer working in harmony to explore new ideas.

This cooperation continues at a breakneck pace in Mens agitate molem (mind over matter or mind moves matter, depending on the translation). The A.I., able to learn at a superhuman level, begins absorbing all of the information it can. The piccolo plays a glitchy solo, the melody adapted from the A Patre Unigénite chant. This scherzo reaches a climax before murmurations of madness begin to infect the computer’s thoughts. The melodies are garbled by the electronics and spit back out as the computer attempts to make sense of the often illogical violence of human history.

Memento vivere (Remember to live) offers an alternative to this pessimism. Perhaps the machine’s creators are attempting to emphasize that there is good on the earth. Again, another perennial science fiction question: could a machine learn to love unconditionally? A light texture in the percussion and flutes swells into unabashed romanticism several times, as if trying to find the right key. These efforts are abandoned when the A.I. is put to the task for which it was created: solving the problem of interstellar travel.

Sic itur ad astra (thus one goes to the stars) begins within the core of the computer. We hear instruments swirl out of the middle register of the ensemble. Threads are activating, and the rhythm begins to become regular and grooving before exploding into a constantly modulating chaconne, soaring higher and higher until finally reaching the heights of A major. There is one last crescendo as the first extrasolar astronauts are hurled into the cosmos with just the glittering of distant stars surrounding them.

The Intermission Vi veri veniversum vivus vici (By the power of truth, I, while living, have conquered the universe) features four antiphonally staged percussionists with electronics so the sound remains continuous throughout the piece.

Part II opens with big, thick chords. Perhaps these are the swirls of nebulae or the landscapes of alien worlds. Themes from the previous movements return in Sic transit gloria mundi (thus passes the glory of the world) but as if in suspended animation. Polytonal chords, or chords built from different keys, swell and ignore the interruptions that represent the artificial intelligence’s growing misanthropy. This madness reaches a breaking point in Omne malum ab homine (all evil from man). The longest electronics “solo” in the piece, we hear the romanticism of the third movement in a perverse transformation.

A breaking point is finally reached in Alea iacta est (the die is cast). Both an homage to classic film scores and a battaglia in the Renaissance tradition, the music is frenetic. The main theme has become a deep scream in the bass instruments, punctuated by bass drum, toms, and timpani. This movement reaches a moment of repose and we end up on D major for the first time, but this release is subverted with a pedal on G. The music has resolved where it is classically supposed to, but there is still uncertainty.

There is a moment of silence. What would a “sentient computer” experience upon death? Would it be immediate? Would it feel timeless? The final movement, Ne plus ultra (no more beyond), meditates on these questions. A double meaning in the original Latin, the phrase could also indicate the reaching of a pinnacle, a success. In this story, humankind has succeeded in preserving itself but at great cost. A lament bass, a descending line in music that often represents sorrow or mourning, supports the main theme in the clarinets, haloed by the other woodwinds as they enter. We end where we started, ready for the cycle to begin again.

In the words of the composer, "...it's part symphony, part movie music, part concept album..."