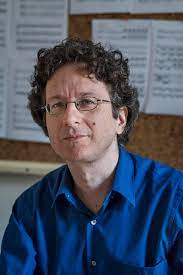 Composer Alexandre Lunsqui considered his camping in Death Valley to be one of the most incredible experiences of his life. Among the impressive sights in Death Valley National Park is Ubehebe, a volcanic crater composed of colorful layers of sediments that have undergone a continuous process of transformation and renewal over thousands of years.

When Lunsqui was asked to write a piece for Due East, a flute and percussion duo, and the Lawrence University Wind Ensemble, he decided to compose one that would pay homage to this fantastic place and title it Ubehebe. The collaboration of a duo of flute and percussion with a wind ensemble makes Ubehebe a very unique work.

Ubehebe Crater (pronounced YOO-bee-HEE-bee) is half a mile) wide and 500 to 777 feet) deep. The age of the crater is estimated from 2,000 to 7,000 years old. The crater was formed when magma migrated close to the surface and the heat of the magma caused groundwater to flash into steam, throwing large quantities of pulverized old rock and new magma across the stony alluvial fan draped across the valley floor.