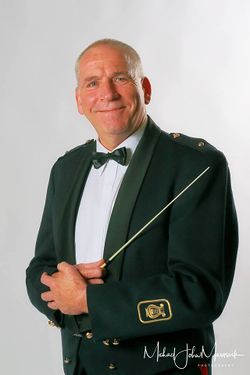 Ton van Grevenbroek (b. 1959, Rotterdam, The Netherlands) is a Dutch composer, arranger, conductor and cornetist.

Ton van Grevenbroek studied the trumpet at the Royal Conservatory of The Hague with John Taber and Peter Masseurs. At the Conservatory of Rotterdam he studied conducting with Arie van Beek and Jaap Koops. He was a member of the Royal Military Orchestra in The Hague as a cornet player, and later he was a trumpet player at Fanfare Orchestra Royal Army Bereden Wapens in Vught. At the moment he is, amongst others, active as conductor of various wind and brass orchestras.

Ton van Grevenbroek wrote music for various professional orchestras. His arrangements are variegated: he made some wonderful arrangements of the music of Alan Parsons for wind and rock band, arranged the music of John Williams, James Horner and Elton John, but he is also in demand for his instrumentations of great orchestral works from composers like Richard Wagner, Ottorino Respighi and Anton Bruckner.