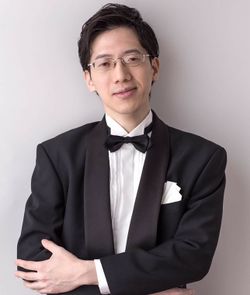 Tomohito Matsushita is a Japanese composer.

After graduating from the Department of Music at Tokyo University of the Arts, Mr. Matsushita completed the master's program in 2009. He received the Doseikai Award upon graduation. He completed the Masters degree at the accompaniment department of the Tokyo College of Music in 2014. He won the 37th All Shikoko Music Composition Grand Prize, the Japan Symphony Foundation’s 29th Composition Award, among others.

In recent years, brass band and ensemble works have been performed all over the country and have been attracting attention. In 2012, he released Because I am me-Yutaka Ozaki On Piano (arranged and played), and in 2014, Yumemigusa-Rinshi Matsushita Piano Solo Album was released. There are many performances with famous pianists, and they have earned a high reputation and reputation.