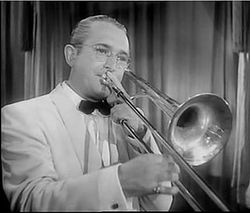 Dorsey studied trumpet for a short time with his father, a part-time musician, but the trombone soon became his favored instrument. For a short period, he and his older brother Jimmy were co-leaders of groups known as Dorsey’s Novelty Six and Dorsey’s Wild Canaries.

Tommy performed with several prominent dance orchestras before joining his brother Jimmy to form the Dorsey Brothers Orchestra in 1934, but the orchestra under that name existed only until the next year, when the brothers separated after a disagreement. Tommy went on to form his own orchestra, and it became one of the finest of the “swing” era. Several performers of this orchestra, such as Frank Sinatra, later went on to become artists in their own right.

The big band era ended shortly after World War II, but amidst difficulties, Tommy held his orchestra together. From 1953-1956, he and brother Jimmy joined to form a second edition of the Dorsey Brothers Orchestra.

Tommy Dorsey’s artistry as a trombone soloist became legendary. The singing quality of his playing, best illustrated in ballads, was greatly admired by both musicians and laymen. Even performers on other instruments were influenced by his lyric style.