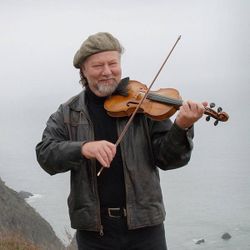 Polish composer Kazimierz Machala (Kaz) was the principal horn of the Sydney Symphony in Australia. One day he heard an Irish mailman whistling this tune and wrote it down for later use. Kaz found that the original tune was written by Scottish fiddler Alasdair Fraser. While teaching horn at the University of Illinois Champaign-Urbana, he transcribed the tune for his 17-member horn choir to perform at the Midwest International Band and Orchestra Clinic. Gerry Wood later took those 17 parts and condensed them into four. Not to be outdone, Molly Wood then transcribed it for band and horn quartet. So you have an Irish mailman, whistling a tune written by a Scottish fiddler, to a Polish horn player, in Australia, transcribed for french horn, premiered in America at an international clinic.