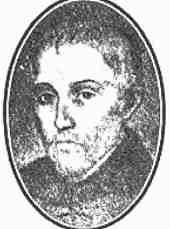 Tomas Luis de Victoria (1548, Avila, Spain - 20 August 1611) received much of his early music education as a choirboy at the Avila Cathedral, where some of the leading Spanish composers of the time were maestros de capilla, wnd where Victoria most likely met the very important composer Antonia de Cabezon. After his voice changed, he was sent to the Jesuit Collegio Germanico where, most importantly, he made the acquaintance of and probably studied with Giovanni Pierluigi da Palestrina. This connection with one of the most important composer of the period undoubtedly affected Victoria's music and there is evidence of Palestrina's influence in even the earliest publications.

Victoria held several important posts as a composer, eventually ending up as the personal composer of the Dowager Empress Maria in 1583 at the Moastario de las Dexcalzas de S. Clara at Madrid. This position of prominence and solitude was so attractive to Victoria that he stayed there despite multiple offers from the largest cathedrals in Spain, eventually becoming just the organist for the Real convento de las Clarisas Descalzas and dying in near obscurity in 1611.

Stylistically his music shuns the elaborate counterpoint of many of his contemporaries, preferring simple line and homophonic textures, yet seeking rhythmic variety and sometimes including intense and surprising contrasts. His melodic writing and use of dissonance is more free than that of Palestrina; occasionally he uses intervals which are prohibited in the strict application of 16th century counterpoint, such as ascending major sixths, or even occasional diminished fourths (for example, a melodic diminished fourth occurs in a passage representing grief in his motet Sancta Maria, succurre). Victoria sometimes uses dramatic word-painting, of a kind usually found only in madrigals. Some of his sacred music uses instruments (a practice which is not uncommon in Spanish sacred music of the 16th century), and he also wrote polychoral works for more than one spatially separated group of singers, in the style of the composers of the Venetian school who were working at St. Mark's in Venice.