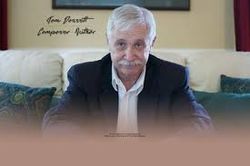 Tom Dossett (b. 14 January 1952) is an American composer and trombonist.

Tom's professional musical training includes a bachelors degree in music education from the School of Music at Illinois Wesleyan University where he studied with Dr. R. Bedford Watkins (piano) and Dr. Thomas Streeter (trombone). Mr. Dossett continued graduate work in composition, studying with Koussevitsky International Recording Award-winning composer Roque Cordero at Illinois State University. Among his favorite mentors was his father-in-law, Bill Brown, who worked at NBC as a studio arranger and trombonist.

Heralded as "The Champion of Bass Trombone Music" by the ABRSM (Associated Board of the Royal Schools of Music), Tom Dossett is one of the music industry's most versatile composers, arrangers, and producers. Tom has been actively involved in radio, television, stage, film and recording since his first piano lesson at age five. His success as a writer has stretched across a wide range of musical formats such as classical, jazz, rock, country, sacred, blues, Latin and many more.

Tom gained a wealth of experience spanning 20 years in the Air Force including the retired 505th Band, the USAF Academy Band and as the former composer/arranger for the United States Air Force Band in Washington, D.C., writing for America's International Musical Ambassadors. His musical creations have been heard from China to Carnegie Hall. With a break in service he spent a brief time in the Los Angeles area writing and having his music performed by such groups as Bill Yeager's highly acclaimed Grammy-nominated Los Angeles Jazz Workshop and Disney bands. He continued as a free lance writer after the Air Force and today is venturing into new musical styles and forms all the time. New chamber music includes compositions for string quartets, trombone quartets, brass quintets, and solo brass instruments such as the bass trombone.

Over the years, Tom has composed and scored more than 1000 performed productions in over 12 varied categories. With many awards, commissioned works and several CDs to his credits, his music is always fresh and innovative.