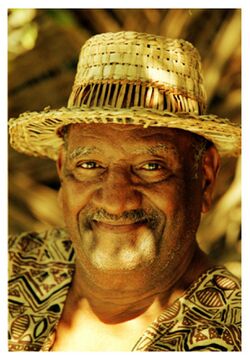 Curet Alonso was two years old in 1928, when his parents divorced and together with his mother and sister moved to Barrio Obrero, located in the Santurce section of San Juan with his grandmother. His daily life experiences while living in Barrio Obrero greatly influenced his work as a composer. There he was raised by his grandmother and received his primary and secondary education. In 1941, when he was 15 years old, he wrote his first song.

After he graduated from high school, he enrolled in the University of Puerto Rico where he studied journalism and sociology. He worked for the United States Postal Service, a job which he held for more than 20years. All the while he continued to compose songs. In 1960, he moved to New York City and worked for the newspaper Diario/La Prensa as a sports columnist.

In 1965, Curet Alonso met salsa singer Joe Quijano who recorded Alonso's Efectivamente which became a hit. Curet Alonso developed a unique style of his own which is known as "salsa with a conscience". He wrote songs about social and romantic themes which told about the situation of the poor Afro–Puerto Ricans and the hardships that they faced. He also focused many of his songs on what he called the beauty of the black Caribbeans.

Throughout his life, Curet Alonso composed over 2000 songs. Arguably, about 200 of these were hit songs, and about 50 of these were major salsa hits. His song Las Caras Lindas (De Mi Gente Negra) (The Beautiful Faces (Of My Black People)) recorded by Ismael Rivera, is considered by many in Puerto Rico as a classic. In addition to salsa, Curet Alonso also composed samba, Airto Moreira being one of the interpreters of his work in that genre. Samba de Flora, interpreted by Airto, is one of many he composed.