Tirolean Trek (A Hike in the Bavarian Alps) 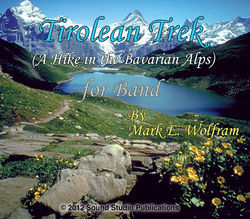 Tirolean Trek (A Hike in the Bavarian Alps)

"Tirolean Trek" (A Hike in the Bavarian Alps) for Band was inspired by a trip the composer took in 1989. After winning the International Horn Society's composition contest for his "Brass Trio-1988", Wolfram was invited to Munich, West Germany for the world premiere at the society's annual international conference.

While in Germany, Mark stayed with good friends Scott and Angi Stuer in Rosenheim (about 75 kilometers south of Munich). Scott and Angi were terrific hosts and showed Mark many marvelous sights in Germany and Austria. This included a warm summer afternoon trip to the Bavarian Alps where they stopped at a chalet-side cafe for some coffee before trekking up the mountain on foot to reach a secluded Tirolean lake and relax in the sunshine. There was even a small storm squall which blew over quickly before they departed down the hillside for home. "Tirolean Trek" is a tone poem based on that afternoon - in the framework of a march.