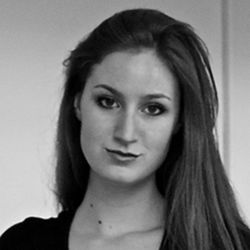 Ms. Tallon began playing the piano at age four and the violin at seven, although she received no formal training in composition or theory until late in her undergraduate studies at MIT, where she studied biological engineering. Tina holds S. B. degrees in biological engineering and Music from MIT, and an M.F.A in composition and music theory from Brandeis University. Her primary teachers include Peter Child, David Rakowski, and Lei Liang. After graduating, she was hired by the MIT music department to develop curriculum for a class in computational musicology to be taught by associate professor Michael Scott Cuthbert, under whom she also served as a research assistant and programmer for the music21 computer-aided musicology project.

She is currently [2016] pursuing her Ph.D. in composition at the University of California, San Diego (UCSD). Academically, her research interests include the relationship between somaesthetics and music cognition, virtual tactility, computational modeling of energetic relationships between various musical parameters based upon Newtonian mechanics, development of software for spectral analysis and composition, algorithmic composition, and computational approaches to musicological inquiry.

In 2010, she received a commission from the League of Imaginary Scientists for a piece to accompany a science-meets-art exhibit at the Powerhouse Museum in Sydney, Australia and later at the Museum of Contemporary Art in Los Angeles. Her SATB choral arrangement of movements from Brian Eno's Music for Airports has also been performed internationally by Bang on a Can, and she has been commissioned by the h2 saxophone quartet, Jennifer Beattie and Adam Marks, the Oklahoma State University's Frontiers New Music Ensemble, and wildUP.

Tina has held fellowships and residencies at the 2012 New Music on the Point Contemporary Chamber Music Program, the 2012 Cortona Sessions for New Music, the 2013 Art of Migration Festival at UC Davis, the Virginia Center for the Creative Arts, and the 2015 soundSCAPE festival. Her first string quartet, selective defrosting, won grand prize in the 2013 PARMA Student Composer Competition, and was featured during the PARMA Music Festival in Portsmouth, NH, in 2013. In addition to grants from Brandeis University, Tina won one of four inaugural Katzin Prize Fellowships to fund her research at UCSD.

Tina is active as not only a composer and passionate advocate for new music, but also as a vocalist, freelance violinist, arts administrator, educator, and arts documentarian. She began singing in 2008, and received an MIT Emerson Scholarship to study voice in 2010. She frequently performed as a soloist with the MIT Chamber Chorus and Concert Choir, and has performed with Bang on a Can, Collage New Music, and kallisti Opera. Additionally, she interned with the Dinosaur Annex Music Ensemble, served as assistant to the artistic director of the Boston Modern Orchestra Project (BMOP), and is now general manager of the Fresh Sound Music series. In 2015, she founded SALT Arts Documentation, which specializes in providing high-quality photography and videography of music, theater, and dance performances. Recently, she joined the Score Follower/Incipitsify team to direct the creation of a new channel devoted to the presentation of pieces with a heavily media-based component in either score or performance.