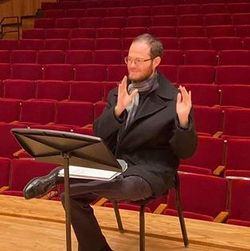 Timothy Amalavage-Smith (b. 1997, Huntsville, Ala.) is an American composer.

He was selected as a winner for the Tennessee Valley Music Festival Composer’s Forum in 2014 and has had pieces premiered at the Dance Alabama Film Festival, where he was awarded the Best Score in 2019. Amalavage-Smith has also had several pieces performed by Twickenham Winds and the Brass Band of Huntsville.