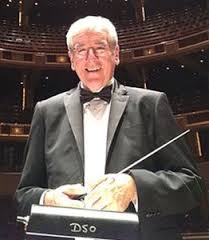 Tim Simonec (b. Chicago, Ill.) is an American composer, arranger and orchestrator.

He began playing the organ and piano at age 8, and became the church organist at the ripe old age of 12! Despite his teen years at the keyboards, he chose to study theology in college. And while his intent was to become a minister, his love of music was a constant in his life. He arranged music for orchestra during college, and after graduation, Tim was hired to write a theme for a local television program. The moment he heard studio musicians play his composition, he realized his passion and career would be music.

Soon after arriving in LA in 1979, Tim was hired to compose music for Happy Days, Laverne & Shirley, and Family Ties. After experiencing debilitating illness in 1984, Simonec has become a walking quadriplegic, regaining partial use of his hands, which has enabled him to conduct orchestras.

In 1986, he returned to pursue his passion and career in film music, which he continues to this day. For years, Tim Simonec has been one of the busiest orchestrators in Hollywood. He has orchestrated and conducted over 80 feature films and 25 television series. He has also composed the music for the feature films A Rumor of Angels and additional music for Suicide Kings and Anne Frank: The Whole Story, which won an Emmy for best mini-series. He recently composed big band competition music for the film Whiplash, one of the most critically acclaimed independent films of 2014.

Simonec has worked as orchestrator/conductor for Graeme Revell, with composer Chris Tyng, and with Michael Giacchino as his conductor and orchestrator/arranger. Over the years the projects with the latter have included video games such as Medal of Honor, Call of Duty; TV series, Alias, LOST, Fringe; and films, The Incredibles, Ratatouille, The Family Stone, Mission Impossible 3, Star Trek, UP , Super 8, Cars 2, MI4:Ghost Protocol, Star Trek: Into Darkness and Dawn of the Planet of the Apes.

For his arrangement of the end-titles of UP, Tim was nominated for a Grammy.