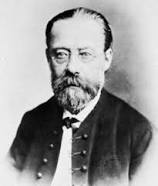 Originally written by Czech composer Bedřich Smetana in 1848 as piano pieces. The three marches are March of the Revolutionary Guard; March of the Students' Legion and March of Freedom. The musically accurately portrays the political upheaval of his time in Prague.

Nationalism was an important force in 19th century music. In Czechoslovakia, it was Bedřich Smetana who took up the crusade. Three Revolutionary Marches is based on Czech melodies, which, it is said, Smetana heard while fighting ranged in Prague.

The March of the Revolutionary Guard was written in 1848, an inflammatory political time in European history. It is known that Smetana, then a young man of twenty-four, composed this march while actual street fighting raged in his city of Prague. There are also two other marches that comprise a set.

Although written originally as pieces for piano solo, the third march (also known as A Song of Freedom) had a vocal text. The second piece, March of the Student Legion, is based on two easily recognizable and traditional sources – the student song Gaudeamus Igitor (Let us therefore rejoice) and a European folk song resembling the familiar tune know as A Hunting We Will Go.