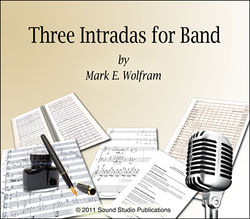 "Three Intradas for Band" is a collection of very useful "openers" for your band concerts. Each of the three Intradas, while keeping to the same general format, has spaces for your announcer and a different musical twist.

The breakdown on each Intrada is as follows: Drums start a soft cadence, crescendo into a fanfare statement in the brass, followed by another soft drum cadence - over which YOUR ANNOUNCER would say something similar to, "Ladies and Gentlemen, presenting the XYZ School/College/Community Band!" - another drum crescendo to a second fanfare statement - and then soft drum cadence under the 2nd announcement, "Conducted by (your conductor's name here)!" - a third fanfare statement with added woodwinds tags off the opening. Then a subdued martial melody underscores the announcer's overview of the concert, soloists and the pieces on the program for 30 to 40 seconds. After the ensemble plays a slow reprise of the opening statements embellished by woodwinds and percussion, the themes reach their final statement - followed by a soft timpani roll over which the announcer introduces the next work on the program.

These Intradas truly add a touch of class and professionalism to your concert opening. And since you get three different Intradas you can alternate between them - or pick a favorite one to use as your musical signature. These have all been performed and received enthusiastic responses from audiences!