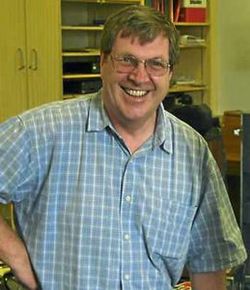 This is what Chris Hazell, the composer, had to say about Three Brass Cats:

Some years ago I had four cats in the house -- all were strays and decided that I was a soft touch when it came to free board and lodgings, so instead of moving on, they all decided to stay. Sadly they have all now gone to the great cattery in the sky. However, at the time they were around I was asked to write some pieces for a brass group (The Philip Jones Brass Ensemble). What should I write about? Well, I've always liked writing about the people and places around me (they appear in a lot of my music) so I thought ... I know, my cats. These days I don't have any cats as I travel around a lot with my work, but it's nice to think that they're still with me in the music.