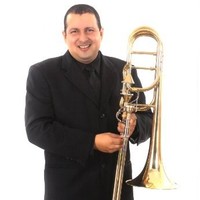 This suite for trombone and band was inspired in two events that happened between January and February of 2020. The first event was the celebration of the Black History Month, and the second event was the Super Bowl LIV's halftime show. I don't know if it was a coincidence or if it was magic, but images from both events were stuck in my head when I started writing the piece.

I was teaching the Afro-Puerto Rican poem (Poesía Negroide) Majestad Negra by Luis Palés-Matos to my bilingual students as an activity to commemorate the Black History Month. Rather than reciting (rapping) the poem, students had to play some rhythm and some improvisations on the drums. I talked about the African heritage in Puerto Rico, and how the drummer improvises rhythms following a dancer's movement. Then, the famous controversy of Jennifer Lopez's exotics movements showed up after the halftime show. I set up the piece's sketches with those images in mind.

The first movement, Allegro Molto, has a subtitle in English called The Queen's Parade. More than a parade, it has another connotation on its Spanish translation. Culipandeando la Reina Avanza means the queen is walking but moving her buttocks, a common movement of the Afro-Puerto Rican dancers from the past and very skillfully performed by Jennifer Lopez and her dancers. Culipandeando la Reina Avanza is also the seventh verse of the poem written by Luis Pales-Matos. This movement is very joyful, dynamic and flourishing. Another characteristic of this movement is the use of some procedures from the Baroque era.

I made the decision to add excerpts from the poem Majestad Negra by Luis Pales-Matos to the second movement. (Yes, the trombonist has to cry out the poem and has to dance and do some movements if he or she knows the poem's meanings.) Majestad Negra describes the elegances, charm, and sensuality of the black women when dancing. It is about how women become queens on our souls. It is about how everything or everyone salutes and plays music for a queen. Using a symphonic tradition, the poem has to be cried out with the accompaniment of the percussion instruments. This second movement is also a quote of the Baroque concerto grosso. The concertino on this second movement is the section where the performer recites the poem with the percussion instrument accompaniment, and the ripieno is the section where the performer plays the trombone with the full band orchestration.

Characteristics of the concerto grosso and the sicá variation of the bomba genre are combined in a different manner during the third movement. The concertino emulates an Afro-Puerto Rican dance party, where the trombone functions as a percussion instrument playing rhythmic patterns to imitate the dancer's movements. Again, excerpts from the poem Majestad Negra return to this movement, but they have to be performed with specific rhythms. The ripieno has the soloist playing melodies as happens with the singing traditions of the bomba genre. The ripieno's textures include more Latino and Hispanic characteristics with the clave and background rhythms.