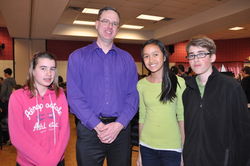 This work is the first movement of the composer's suite The Hammer of Asgard.

Thor is the god of thunder and the prince of Asgard. With his mighty hammer Mjolnir, he can summon lightning bolts and fly. He is headstrong and bold, and never misses an opportunity to show off. Loki is Thor’s half-brother. He is the trickster god and loves to pull pranks on people. You can never be sure whose side he is on and is so unpredictable.

Thor and Loki is the first movement to the three-part suite The Hammer of Asgard, an original soundtrack style composition for brass and percussion. Using Norse mythology as the theme, The Hammer of Asgard introduces and explores the gods and other characters that make up these famous stories. Wailing Hollywood horns, brilliant trumpets, energetic percussion writing and powerful low brass parts make this fun to play for all and a wild adventure for audiences.