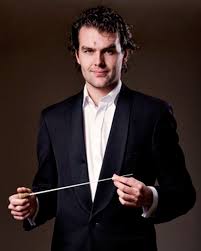 Thomas Geerts (b. 1983) is a Dutch trumpeter, composer, conductor and educator.

Mr. Geerts studied classical trumpet at the conservatories of Amsterdam and Rotterdam and wind band conducting in Amsterdam.

He plays in the Amsterdam Brass Quintet, Zorita, TenToon Ensemble and is often asked to substitute in various ensembles and orchestras.

As a conductor Thomas has a position with the Waterlandse Harmonie, Fanfarecorps Zuiderwoude, the student orchestras of the Tata Steel Orchestra, Erato Spanbroek and he does various projects and concerts with other orchestras and ensembles.

As a composer and arranger Thomas is also very active. In 2014 he made the musical theatre show Het Water Stijgt together with writer Arno Smit. With the French director Arnaud Devolontat he made a new version of Rossini’s Barber of Seville in the summer of 2015 for Opera Mosset (France). For the Royal Dutch Marine Band and soloist Eric Vloeimans Thomas arranged two pieces at the end of 2015, which are on the cd Around the World. At the beginning of 2016 Thomas wrote the piece De Nacht van 14 januari for de documentary Water Woestenij by filmmaker Miranda van der Spek. Before the summer of 2016 Thomas made a second musical theatre show with writer Arno Smit, with the title Wie Wind Zaait.