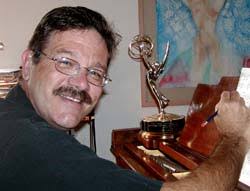 Mr. Sharp received his BM from Ohio University, where he wrote for and conducted one of the jazz ensembles, and studied composition and arranging and film scoring in Southern California at the acclaimed Grove School of Music.

Mr. Sharp has written arrangements for a diverse group of artists including the New Christy Minstrels, Joe Sample, Wilton Felder, and Harry Connick Jr. He has composed, arranged, and orchestrated music for Disney, Dreamworks, Paramount, Universal, and others. He wrote the music for the feature film Ping and orchestrated on the movies When Harry Met Sally, City Slickers and The Addams Family. He has written for numerous animated television series, including Aladdin (for which he won an Emmy), Little Mermaid and the award winning New Adventures of Winnie the Pooh.

In 1999 Thom founded and was the main composer for Sharp Mountain Music, a publishing company specializing in string orchestra music for the educational market. After building up the catalog to over 50 titles, he sold the company to Latham Music, a division of Lorenz Music.

In 2009 Thom received the Distinguished Fine Arts Alumni Award from Ohio University. He is a member of the Professional Musicians Union Local 47, the Recording Musicians Association, The American String Teachers Association, and ASCAP.

Thom currently teaches advanced harmony, film scoring, and orchestration at UCLA Extension, and the Los Angeles County High School for the Arts. He regularly conducts seminars on a variety of topics for ASTA and other professional education development organizations across the country.