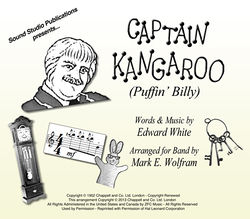 The theme to the long-running CBS-TV show "Captain Kangaroo" (Puffin' Billy) was written in 1952 by composer Edward G. White, a British version of Leroy Anderson. Familiar to millions, this originally orchestral work has been arranged for the first time for concert band by Mark Wolfram and will bring non-stop ear-to-ear smiles to audiences and performers alike.

The "Captain Kangroo Show" was filled with memorable characters such as The Captain (Bob Keeshan), Bunny Rabbit, Mr. Moose, Grandfather Clock, Dancing Bear and Mr. Green Jeans. The theme music set the tone for the fun and hijinks that ensued every day as kids of all ages heard the Captain jingling his keys to "The Treasure House" at the start of every show.

This delightful concert band arrangement would make a wonderful concert opener - or a terrific encore! Get your audience to pull out their own "keys to the treasure house" and jingle along. They'll "feel like a kid again".