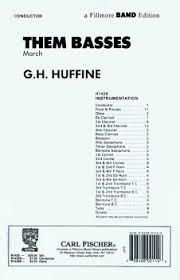 Them Basses March is subtitled "A March in which the Basses have the Melody throughout." Huffine might have included the names of all of the lower brasses and the lower woodwinds in the subtitle, inasmuch as they also have the melody -- after the introduction by the cornets. The march was written to sound complete with a minimum number of players, such as in a circus band playing for the elephant act. Because of the small number of different parts, Them Basses March is equally suitable for a 2,000-member massed band, a 28-piece brass band, and a marimba ensemble. It shares this characteristic with much of the music of the Baroque period. Rhythmically, it swings. It was on the J.W. Pepper list of favorite march for many years, almost since it was published in 1924, and it is still popular in many countries -- a very uncomplicated march classic.