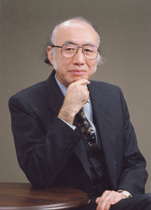 Tetsunosuke Kushida (b. 1935, Kyoto, Japan) is a Japanese composer.

While majoring in mathematics at Kyoto University of Education, Kushida studied composition with Tadashi Fukumoto. After graduation, he continued studies under Nagomi Nakaseko and film-music composer Nakaba Takahashi. He also participated in the group "Tsu-ku-ru, Composers' Group in Kyoto" and began his wide compositional activities. Kushida was born in a family of Japanese musicians and grew up surrounded by Japanese instruments so his compositional style is generally based on traditional Japanese music.

After he won the Ongaku-no-Tomo-sha Corporation Prize for Composition in 1969 for Stone Garden, he studied composition and arranging for wind music under Paul Yoder, ABA first president, and Ichitaro Tsujii, the premiere conductor for Asuka. Tsujii has been a major influence on Kushida's works for winds. Asuka was recorded by the Tokyo Kosei Wind Orchestra and judging from its frequent performances both in Japan and foreign countries, it can be said that the piece has entered major repertory status.

Kushida has produced many works with Japanese historical inspiration, which include Collage for Band - on Folk Songs from the Tohoku District, Clouds in Collage, Ritual Legend, Snow-Moon-Flower, Sagano, Kagerohi (Shimmering Air), and The Clouds Add Colors. He has also written many works for wind instruments, which include works for recitals by Keiji Munesada, Keiji Shimoji and Masahiro Maeda, and works for saxophone ensembles. In 1995, he was awarded the 5th Academy Award, Wind Music Japan. In the same year, his work Autumn in Heian-Kyo was premiered by Baden Wurttemberg Wind Ensemble. He was also invited as a special guest professor to Osaka College of Music and gave a lecture under the title of "Japanese Traditional Music and Wind Music."

A collaboration with Kohei Amada (sculptor, koto player and harpist) and his son Koji Amada (harpist) was to lead Kushida into a definite direction in terms of his view of the Japanese sound and Japanese music. Kohei Amada also was a tremendous influence on his life, as well as his music. His recent piece Quiet Side Path for Harp Ensemble and Narrator, performed in the memorial concert for Kohei Amada by the Amada Harp Ensemble under Koji Amada, with Fujio Tokita narrating, strongly reflects his view of life.