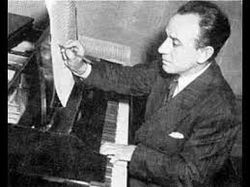 Tucci received extensive music training as a youth, learning to play the mandolin, guitar, and piano. He studied at the Instituto Musicale Ceri in Buenos Aires as a scholarship student.

At the age of 26, he came to the United States and settled in New York City, working as a consultant at the National Broadcasting Company network in Latin American cultural programs. He also led the International General Electric Orchestra. From 1930-1959, he recorded many Latin American compositions, playing on native instruments for RCA Victor records.

Beginning in 1939, Tucci had a wide and varied career, including positions as director of Cadena de las Americas, director of Latin American programs for the Coca Cola Company, and heading the Voice of America Latin Music Section. He eventually returned to his native Buenos Aires.